Iconic movie and TV cars, including KITT and the “Bandit” car, will be featured at the 2022 Chrome & Ice Interior Car Show, February 11, 12 and 13. Pictures of Ben Gagnon

FLINT – The 2022 Chrome & Ice Indoor Car Show heads to Hollywood in February with an array of iconic vehicles from classic movies and TV.

One of those cool cars will be the Knight Industries Two Thousand, better known as KITT from the 1980s TV show “Knight Rider.” The 1983 Trans Am Firebird, owned by Tom Brown and his son Brien Lord, will be among several replica movie cars gracing the lobby of the Dort Financial Center from February 11-13.

“It was an Arizona car, and when we bought it, it was brownish gold with a white quarter panel,” he said. “All the metal in the body was dented and rust free, but it was an ’83 car in 2005, after all, and it needed a lot of work.”

Lord and his father soon made several modifications to the car to give it a distinct “Knight Rider” appearance, such as applying sleek black paint and adding KITT’s red laser grille lights to the hood. They also purchased a bespoke “futuristic” dashboard and other modifications designed by replica makers of KITT parts. 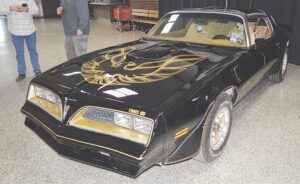 Lord said he hopes kids will be impressed with the car when it’s on display at Chrome & Ice.

“I remember coming to a car show here (at the arena) as a kid in the 80s and getting to see KITT,” he said. “It was fun to turn around and build this car with my dad and have those memories. Now young kids can come and have an experience similar to what I had when they saw this car. .

Fans of the 1977 hit action movie “Smokey and the Bandit” will also get to see a replica of the iconic “Bandit” car – a black and gold 1977 Pontiac Trans Am. Only four cars were built for the film, which was the second highest-grossing domestic film in 1977. The Chrome & Ice replica is provided by Bob Thibault of Goodrich.

Original TV/movie cars will also be on display, including a newly refurbished DMC DeLorean from the 1980s “Back to the Future” movie franchise and a George Barris-designed Batmobile from the 1960s “Batman” TV series. Both vehicles come from the Volo Auto Museum.

Chrome & Ice will also feature a 1969 “General Lee” Dodge Charger car from “The Dukes of Hazzard” TV series. This “General Lee,” provided by Scott Spirakes of Auburn, IN., was featured at the end of the show’s opening credits, taking an incredible leap 82 feet long and 16 feet high above of a patrol car.

Other cars with local connections will include a replica of the 1979 Chevrolet Camaro Z28 from the film “Fast Times at Ridgemont High”, owned by Scott Koon of Goodrich; a 1980 Ferrari 308 GTS from the “Magnum PI” television series, owned by Dr. Bobby Mukkamala in Flint; and a 1961 Ford Econoline truck built by custom car builder Danny “The Count” Koker, featured in Season 6 of “Counting Cars” and acquired by Mark and Andrea Brimmer of Linden.

The 2022 Chrome & Ice Indoor Car Show will be presented by Back to the Bricks at the Dort Financial Center on February 11, 12 and 13. For more information on Chrome & Ice or to purchase tickets, visit www.backtothebricks.org.